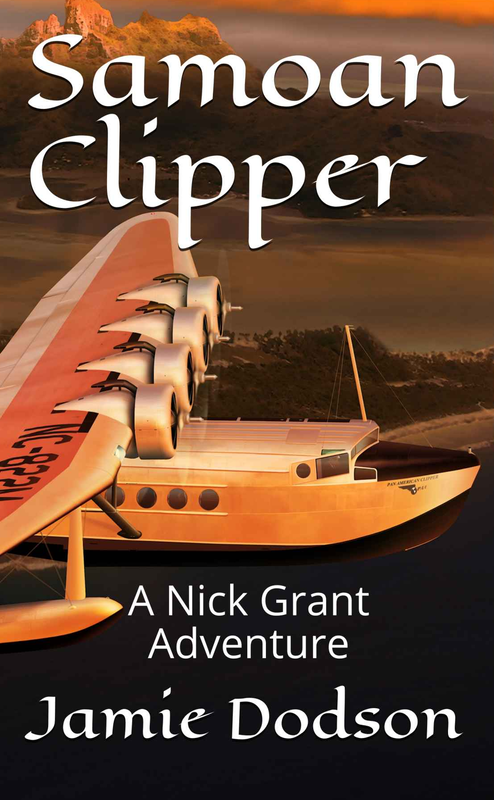 ​         Nick Grant is a head strong student from a poor family living in Alameda, California during the Great Depression. To make ends meet, he works part time as a mechanic for Pan American Airlines at the local seaplane base. Last summer, Nick competed ROTC flight training under the Naval Aviation Cadet Program. The Navy will pay for college if he finishes the program and serves in the Naval Reserve.
Pan Am decides to open a new Pacific route to New Zealand and assign Nick as a flight mechanic. However, Imperial Japan opposes what they see as the American encroachment and acts. Agent Miyazaki causes the Samoan Clipper to crash in route and plants evidence that implicates Nick in the tragedy. Disgraced and dismissed from Pan Am and the Navy, Nick and gal pal Nancy must track down Miyazaki and find the proof to clear his name. Without it, Nick’s dreams of a Naval Aviator commission are over.

Schiffer Publishing released a Pan American Airlines anthology, in 2018 Edited by Teresa Weber and Jamie Dodson,  Hunting the Wind  is a compendium of memoirs by former Pan Am employees, their children, and  passengers who flew on the early transoceanic flying boats.

Check back for release date and additional details. Or sign up for the Mailing List for release dates. Submit your name and your email address, and we'll let you know whenever a new book by Jamie Dodson is released. What we won't do: Spam you or sell your information to anybody. You're also free to unsubscribe at any time.
Get Your Copy Today
© Copyright 2022. All rights reserved. Jamie Dodson Books and F.A.T. Media
​ Powered by WYNSUM